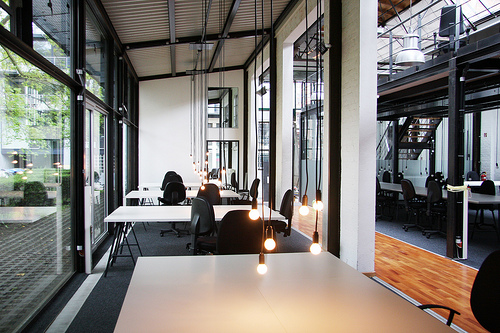 Bjark Ingels is an architect. He’s known for designing buildings that are expansive in scope—and that also solve real-world problems. A Ted.com Q&A with Ingels, “On architectural alchemy,” describes alchemy:

“What I like about the term alchemy is that you take traditional ingredients that would separately be just ‘normal this’ and ‘normal that,’ and when you combine them, because of symbiotic relationships, you get much more out of the mix than if you were to leave them separate.“

Ingels is looking at alchemy through the lens of architecture, but isn’t this definition of alchemy applicable to coworking? Coworking is an alchemy of sorts: it takes independent people (who may work on wildly different projects and often do wildly different things) and puts them together in one physical space.

So, the “normal freelancer that does this” and the “normal independent business owner who does that” can collaborate to create something so much more than if they had been left separate. And it happens because the two people are working in the same physical space.

So how can you, the coworker, be an alchemist at your coworking space? Here are two simple ways:

1. Work in various spaces: If your computer set-up permits, work in different areas of your coworking space. Try doing your brainstorming in the lounge, or sit at a desk you don’t normally sit at. You may spark a new conversation or idea simply by choosing to work in a different location.

2. Opposites attract: Pick another coworker who does something completely different than you—and ask if they’d share their perspective on a project or challenge you’re working on. Offer to do the same for him/her.

There are likely many other ways to create “alchemy” in your work. What experiences have you had in coworking where two distinct ideas/people came together to create something bigger and better?